Today, esports are more about organized structures than the grassroots movement that has propelled competitive gaming to the status of prominence it enjoys today. From the NBA 2K to League of Legends, to Overwatch, esports athletes are paid professionals

Esports Is a Viable Career Path

The competition to break into the highest level of esports is tough. There’s money at stake and unless you are the best player in a certain game, there’s not much use top organization investing millions to buy franchise slots have for you.

Despite the drawbacks of participating in a highly-competitive environment that puts you to a test both physically and mentally, there have been significant changes in the way organizations treat athletes.

Starting with salaries, the livelihoods of professional video gamers are far less precarious these days. Contracts are signed from one season to the next, housing and other expenses are all taken care of. In a word, athletes are enjoying quite a few comforts.

Understandably, the grassroots members and aspiring professionals are having a more difficult time at it, but that is the nature of the competition. Case in point – the Korean esports industry.

South Korea remains one of the best developed esport ecosystems. The country was running competitive video gaming at a time when the West looked down on the activities as the preserve of basement-dwelling riff-raff.

The landscape has changed drastically though, with esports competitors in the limelight and fans attending huge, sold-out stadiums to cheer for their heroes. League of Legends and Overwatch have dominated esports in South Korea driving the industry forth. 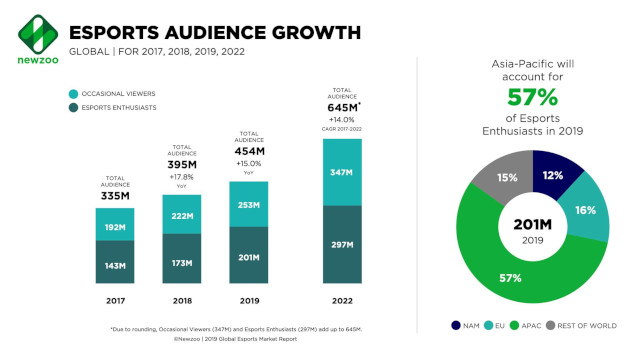 Based on a study conducted by InvenGlobal, some interesting metrics surfaced:

These sums exclude additional income generated through prize money, streaming opportunities and additional participation as part of partnerships. One untapped market is brand partnerships between individual players and mainstream companies, with the non-endemic companies still focusing exclusively on signing up organizations as opposed to teams.

InvenGlobal established another interesting metric. LCK players are overwhelmingly young with the medium age at 20.8. Esports athletes in general don’t have very long careers, with the majority retiring by the time their peers in certain countries around the world have to go to college.

The average age of esports athletes in South Korea is 20.8

In South Korea, only 3.9% of all players had been active around 5 years, with all the rest being new faces. This can be explained by the fact that League of Legends and most importantly Overwatch have only now been gaining significant traction in the country, so the arrival of fresh players is not surprising.

Overwatch is a fantasy first-person shooter (FPS) inspired by the most unexpected game, Valve Corporation’s Team Fortress 2. Nevertheless, Overwatch is one of the driving forces in today’s changing esports landscape.

The game has managed to completely change how we think about competitive video gaming, borrowing the franchise model from the NBA and NFL and distilling it into esports.

The fanfare and momentum built around esports franchises such as the Overwatch League (OWL)’s New York Excelsior and the inaugural squad of Toronto Defiant has been awe-inspiring. Overwatch has managed to localize esports and develop region-based competitions and communities, which has given the segment a more mainstream look.

Still, Blizzard have also taken some decisions that haven’t been met with excitement by fans, including the reduction of the importance of the OWL feeder league, the Contenders, which will now allow fewer opportunities for upper mobility, unless an OWL franchise snatches up a player and offers them a chance to play at a higher level.

The snag with this is that the Contenders seems to be a less of all-for-one model than every-man-for-themselves structure. Recognition would guarantee you a spot up, but it would mean abandoning your teammates.

Good for career, bad for moral.

Following in the footsteps of Overwatch, League of Legends also developed franchised entities across various regions, rebranding the European and North American competitions.

While esports structures and leagues have been reassuring, there are at least two bad examples of esports ambitions gone very wrong. The H1Z1 League is the first. Though it all started well and expectations were high, the namesake Battle Royale game couldn’t venture very far, ending up collapsing amid reports of pending payments to teams and players.

H1Z1 Pro League Goes on the Backburner Because of Payment

The Heroes of the Storm Global Championship (HGC) was also cancelled abruptly and without much in the way of warning, sending many teams and players to despair. Team Liquid, one of the most respected esports communities, issued a heart-felt letter, bidding goodbye to their roster.

Is Apathy Treated with Money?

With esports career burning out fast, it’s worth considering, even in passing, that certain games can make it as a true esports while others struggle. In both cases, all development must be natural and not forced.Many publishers and developers have been committed to the idea. UniSoft’s done significant efforts to bring Rainbow 6 up to speed.

Meanwhile, PUBG Corp. has released a massive esports plan which so far hasn’t elicited much in the way of viewership and following. The European PUBG League was even delayed, though there has been an official statement recently that PUBG Corp. will release additional information by the end of February.

In light of all of this, it’s worth noting that esports have changed. To draw the line and say whether it’s “all for the best” or mistakenly believe in something inherently “wrong” with the current model means to go to an extreme.

Instead, we have to keep reminding ourselves that esports, a massive undertaking as it is, has to be treated carefully lest it collapses on its own weight as certain formats have so far.

Article Name
Esport is a Viable Career Path in South Korea and Beyond
Description
Esports are a viable career path. Salaries are improving and so are opportunities for gamers. Meanwhile, the majority of participants retire early.
Author
Simona Potter
Publisher Name
Esports Wizard
Publisher Logo